Sisters In Need of HoPE 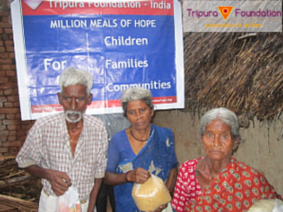 Panjaliammal, Chinnaponu and a neighbor receiving rations from Tripura Foundation.

Panjaliammal and Chinnaponu are two elderly sisters living in India.  They both grew up in dire poverty.  Their parents barely earned enough to feed the family, so as soon as the sisters were old enough, their parents got them married, and they moved to different areas in India with their husbands.

Chinnaponu had a very short married life.  Problems with her husband forced her to leave him.  She arrived at her sister’s house with nowhere else to go.  Panjaliammal lived with her husband, who worked in a tannery, and also had a young son.

They were struggling to earn enough just to get by, but they accepted Chinnaponu into their home.  Panjaliammal would cook for her husband, son and sister, even though she was partially blind.

As the years passed, Panjaliammal’s vision started to rapidly decline.  Her husband was admitted to the hospital and diagnosed with Cancer.  This meant he could no longer work and had to be taken care of at home.

Panjaliammal’s son, who was now a grown man, abandoned his parents after he got married.

Chinnaponu worked in the neighborhood wherever she was offered a wage, but as she aged, she was unable to continue working.  Life became even more difficult for Panjaliammal after her husband passed away.  The sisters had to resort to begging their neighbors for food.

Tripura Foundation’s India HoPE Learning Center students are often the ones who find or know of the elderly members of their villages that are in desperate need of a helping hand.  So, as soon as the sisters were found, we stepped in to aid them with food, supplies, clothing and home support.

Like these aging sisters, there are thousands of other elderly people, abandoned by their families, suffering ill health, and struggling to survive.  We depend on donations from kind hearts like yourself to give help and HoPE to these elderly folks living in lonely, destitute circumstances.

Click the button below to donate generously to our HoPE for the Elderly initiative, so we can extend a helping hand to more aging people in need of HoPE.