Phonemic Intelligence, a scientific and brain-based education methodology, said its creator Dr. Baskaran Pillai, could be the “most effective way out of the poverty trap”, while announcing the launch of 100 HoPE Learning Centers in 2013.

“A person’s socio-economic environment influences the development of their brain. Growing up in a poor neighborhood can impact a child’s learning ability, and their mental and emotional well-being in the long run”, told Dr. Pillai, an international teacher, thought leader and humanitarian. 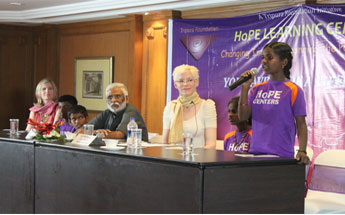 Dr. Pillai claimed that Phonemic Intelligence can help overcome such negative effects of poverty by changing the neurology of the brain for the better. “It involves using specific phoneme (smallest unit of sound that contrasts with another sound, in any given language) sounds in different parts of the brain, by which it is possible to enhance the functioning of those parts of the brain. Our study done at a leading brain lab shows positive effects of these sounds on the brain”, he explained. 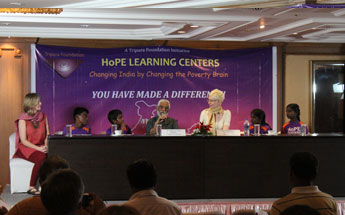 “In this pilot study, the participants were made to listen and vocalize 4 sounds focusing on different parts of the brain. Using EEG (Electroencephalography), we recorded electrical activity in the brain and found profound changes with the use of each discreet sound”, said lead researcher Dr. Anbarasu Annamalai, while introducing the methodology of the study via Video.

“We used a modern computer technology known as ‘Independent Component Analysis’ to break the brain’s activity into its component parts. We were able to see the differences between the sounds in each component in a very detailed way. The impacts of these sounds is felt everywhere in the brain, not just in the primary auditory cortex (part of the brain that processes sound). We can see a strong effect even in this pilot study”, explained Jay Gunkelman via Video; he is the Chief Scientist at the US-based Brain Science International where the study was done.

These sounds are used as part of the Phonemic Intelligence methodology implemented in HoPE Learning Centers – the educational initiative of Tripura Foundation, a non-profit founded by Dr. Pillai. “2450 children are using this brain-changing education in 70 Centers across 3 states – Tamil Nadu (58 centers), Goa (10 centers) and Haryana (2 centers).

Some of the HoPE Heroes, as these children are called, narrated real-life stories of how HoPE Learning Centers have enhanced their confidence and expanded their thinking. Sindhu, a 11-year-old HoPE Hero from Kannambakkam village, readily gave her ticket money to an old lady whom she found abandoned by her son, while Sindhu herself walked back 10 kilometers to her home.

Jeevetha, a 13-year-old HoPE Hero from Puducherrymedu village, wrote a petition to her District Collector requesting a bus facility for her village. Impressed by her leadership, the Collector passed orders for buses to be run during school hours. Now, Jeevetha and children of her village need not walk 6 kilometers everyday to their school.

“Phonemic Intelligence can improve the social behavior of children, reduce mental stress, and enhance their ability to memorize, retain and deliver”, said Dr. Pillai. He believes that this brain-based education has the potential to even transform the lives of adults who are caught up in the cycle of poverty.

About Dr. Pillai and Tripura Foundation:

Dr. Baskaran Pillai is a humanitarian, visionary and the founder of Tripura Foundation, a non-profit committed to eradicating poverty.