Offering HoPE One Day at a Time 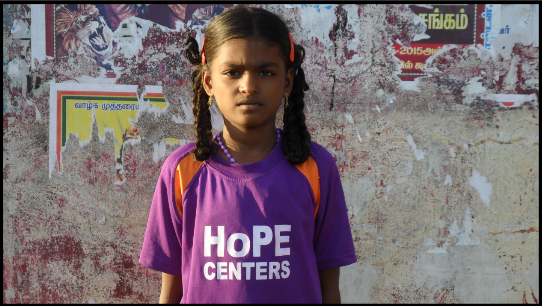 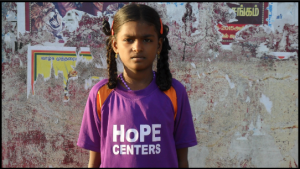 Nandhini was in third grade and her sister a toddler when their father started having intense pains in his stomach and was hospitalized. He was diagnosed with stomach cancer and the doctors informed the family that it was too late to save him, as the cancer was already in a late stage. The family couldn’t afford pain medicine for him and had to bring him home.

Every day and night, the little sisters had to listen to their father cry out in pain and watch helplessly as he withered in front of their eyes. Though Nandhini was not old enough to fully understand what was happening, she would hold her little sister away from the cries of pain. She would tell her stories, sing her songs, or take her out of the house so that the toddler wouldn’t get scared.

Sadly, a few months after being brought home, her father breathed his last.

Nandhini’s mother, who stayed home to take care of her husband, began work as a cook after his death. She currently works as a cook in a nearby college.

The family had to move out of their old house because they were no longer able to pay rent. Nandhini’s aunt, a widow with no children, took Nandhini’s family in to live with her. She works at a construction site and earns only when there is work at the site.

Even though Nandhini’s mother and aunt don’t make much money, they have been able to sustain enough to get the family a small meal every day.

Years have passed since her father’s death, yet Nandhini wakes up at the middle of the night hearing her father’s screams. She says she can barely sleep at night.

She has been a part of one of Tripura Foundation’s HoPE Learning Centers for two years now, but she has not yet been able to come out of quiet and withdrawn states. Nevertheless, we are hopeful that our HoPE Center is making a difference in her life, little by little.

She says that she wishes to become a doctor to cure as many people as possible. With ambition as big as that, we are certain that her sad, hopeless countenance is slowly being replaced by HoPE and courage.  No matter what, with YOUR help, Tripura Foundation is here to help her to rise and shine.

Help us make an even bigger impact and help even more children like Nandhini and her little sister by sponsoring a HoPE Learning Center.  Visit this link to make your contribution. Thank you.