From Depression to HoPE 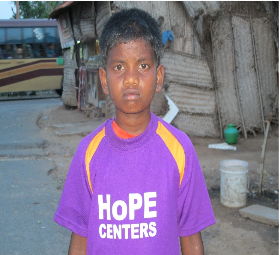 Manikandan is in 7th grade and lives with his father.

After his mother committed suicide a couple of years ago, Manikandan lived in a state of complete sadness and misery.  He wouldn’t eat and he stopped speaking with others, instead retreating to his own depressed world.

His father and other family members tried making daily conversation to get him to speak at least a few words, but after some time, they gave up.  His father tried everything within his power to make his son feel better but nothing seemed to work.

That is, until he found out about Tripura Foundation’s HoPE Learning Center in his village, and enrolled Manikandan.

At first, Manikandan showed no signs of improvement.  But, gradually, as he continued practicing Phonemic Intelligence and yoga, he began to recover from his depression.

Now, he enjoys playing games, participating in activities and studying his academic subjects.

His father has expressed to us his utter happiness and gratitude to Tripura Foundation for bringing HoPE to his child when he thought all hope was lost.

Help us give HoPE to other children who are depressed, sad, forlorn and otherwise hopeless.  Sponsor a child for as little as $10 a month by clicking the ‘Donate Now’ button below.