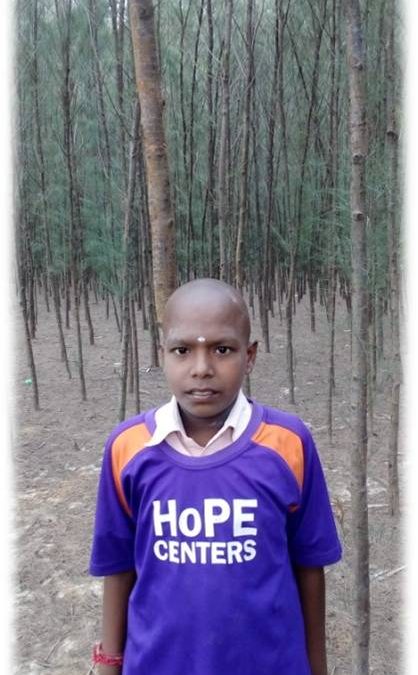 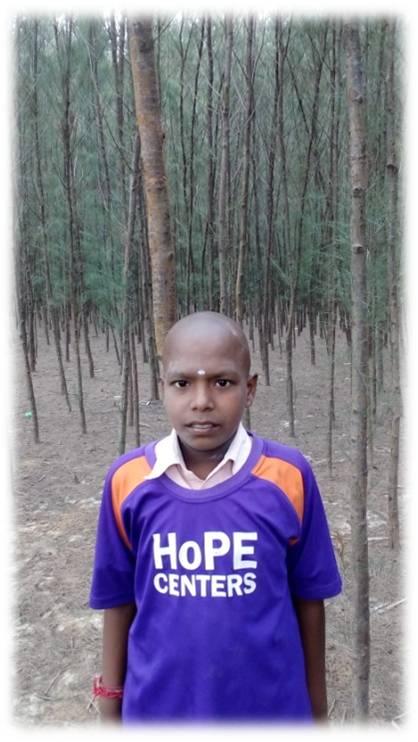 Kalaiarasu was ten years old when he was diagnosed with bone cancer. What started as a minor pain in his joints soon led him to being hospitalized three days a week. Despite pain and suffering, he has a story to tell about all the love, care and support given to him within his HoPE Learning Center…

It all begun when Kalaiarasu, usually an energetic child, started to complain about leg pains. His parents pinned his complaints on the fact he usually spent a large amount of time playing various sports. Yet, Kalaiarasu soon started withdrawing from sports or any kind of activities which involved standing, until HoPE Center teachers noticed his behavioral changes, asked him about them, and went to his house to meet with his parents.

Kalaiarasu’s father was a local driver and his mother was a day laborer. With three children to feed, on low wages, it wasn’t an easy option to take Kalaiarasu to receive medical help, but the HoPE Center teachers talked them into taking him to a local hospital.

The doctor who initially observed Kalaiarasu gave him simple painkillers and sent him home without running further tests, until the HoPE Center teachers advocated on his behalf and made sure that he received proper tests, which revealed that he had Stage II Bone Cancer.

Kalaiarasu was finally admitted to a special cancer ward for children and was given the necessary treatments for several months until he was able to come in on just a weekly basis to receive chemotherapy as an outpatient. Within days, he began to lose his hair and had to shave his head. He lost weight and grew weaker.

Some villagers thought that he was not going to survive, but his HoPE Center friends and teachers decided otherwise and made time to pray for his improved health and full recovery every day They also sent for herbs from a special factory in Kerala. The herbs quickly lessened his pain and reduced side effects of his cancer treatments. His doctors were amazed and his family happy.

Kalaiarasu is now eleven years old and still undergoing treatment. He has immense love and care for and from all his friends and family. He firmly believes that his health has improved because of his friends’ and family’s compassionate care and prayers. He is grateful for such love and support from all his HoPE friends and family who still pray for his well being every day. We all wish Kalaiarasu the very best on his road to recovery!

It doesn’t take much to uplift the life of a special child, like Kalaiarasu. Right now, just $9 a month covers the costs of HoPE Center sponsorship, tutoring, lessons, materials and daily mini meals. For just $300 a month, you can sponsor an entire HoPE Learning Center, including Kalaiarau’s’s Center, Velur I!